Rain, Snow, Mud__ It Has To Be Spring

Here in Ohio we started spring in the normal fashion with rain, rain, and then a little bit of rain. There were a few sunny days in-between, but on the rainy days, Emily and I whiled away the hours playing Uno and Jenga. And after the long, harsh, cold winter, we were happy to welcome spring rains. And then it happened, it snowed one last time. Yep, it was almost seventy one day and it was thirty and snowing the next.

As I looked at all the beautiful daffodils that had bloomed just days before, I saw their poor faces bowed to the ground with the weight of the frozen, fluffy precipitation heavy on their slender backs. I worried that the cold would kill them, but for the most part, they survived and returned to their upright positions, sunny faces looking skyward.

What turns out to be so interesting about this is the first book I picked for review this week had similar occurrences. It was called Mud Flat Spring and it was the story of all the creatures in  Mud Flat and the different things each group did when spring arrived. Some did the happy dance of spring. Some went back to bed. Some looked at the beautiful flowers. But then__ it snowed. Few of the characters seemed to be bothered much, and they went about enjoying the snow as much as they had the beginning of spring. Some of the animals bemoaned the fact that the snow ruined spring, but my all time favorite line from the book had to be when one of the characters replied, "when this snow melts, we'll have spring all over again." What a lovely way to look at it! 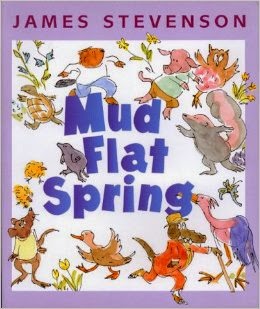 The second book I read was a book of poetry since we still have a week left to celebrate National Poetry Month. It was called A Whiff of Pine, A Hint Of Skunk, A Forest Of Poems. These poems actually celebrate all four seasons of the year, but Eau De Forest, A Woodsy Cologne reminded me of how we spent Easter Sunday afternoon. We did a little geocaching, did a little hiking at Gorman Nature Center, and had a little picnic lunch. The hiking and the geocaching offered me the opportunity to take some pictures along the muddy trails. I did indeed partake in a whiff of pine, but thankfully not of skunk. 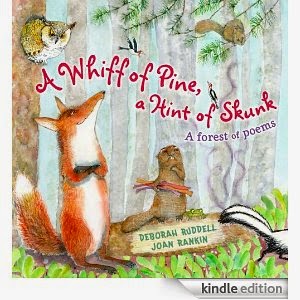 ﻿﻿
One of our geocaching sites was at a very small and very old cemetery. Cemeteries happen to be one of Emily's favorite geocache spots and she is always curious about the people who lived so long ago. On this particular trip, we saw some small rounded head stones that had the names on the tops instead of the sides. Some were so worn that we could barely read the names, so Emily decided to make a grave stone rubbing. Her constant curiosity reminded me of the third and last book I read titled  A Chick Called Saturday which happens to be by my very famous UK friend, Joyce Dunbar.
Momma chicken has seven little chickens, each one named for a day of the week. All of the chickens behave well accept for Saturday. It isn't that Saturday is bad, it's just that he is full of curiosity. Saturday finds himself in all kinds of trouble until he finally figures out what he is meant to be when he grows up. 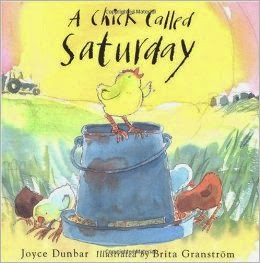 Well, that about wraps it up for this week. Join me next week for another exciting episode, same crazy time, same crazy channel. And feel free to drop by my personal website, Fun With Aileen, any day of the week for even more on reading, writing, my very own early grade chapter book, Fern Valley, and my soon to be released sequel, Return To Fern Valley, coming summer of 2014! I'm also on twitter @AileenWStewart if you want an extremely brief glimpse into my days.