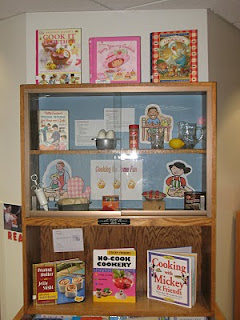 Today I switched out the children's display case at my local library. I took out the beach theme that went along with this year's summer reading program and replaced it with a cooking theme. I started setting up the children's displays last September when I heard the children's librarian was looking for things to display. It was a Barbie theme with dolls and accessories graciously lent to me by my daughter. I divided the two shelves into four sections and set up little Barbie scenes. One area was a driving to the beach scene with a Barbie Jeep and lots of road signs. Barbie let Ken drive of course because she didn't want to hurt his manly feelings. Another area depicted a teenager babysitting Kelly and a friend. The teen was at a table doing homework and the kids sat on a couch watching television. The the other two sections were a mix of Barbie DVDs also borrowed from my darling daughter and variously dressed Barbies. And of course, Barbie books from the libraries shelves were prominently displayed on top of the small, oak case. To me it was a thing of beauty and an outlet for my creative soul. I was told record numbers of Barbie books were checked out that month.

Somehow this one successful display led to an other and another until I realized I am now unofficially in charge of the children's display case. At Thanksgiving time I did a autumn display, at Christmas I did a Winter village resplendent with Lemax buildings, trees, fake snow, and small people. In February I did a Hawaiian display thinking that if people were as tired of the cold and snow as I was they would enjoy such a creation. I did a welcome Spring/Easter theme, A seashell display, Dive into Reading Summer Beach display, and finally today's cooking up Some Fun theme. I find that not only does this creative process bring me great joy, it leaves me hoping that others share in the joy as well. As I place carefully chosen books with each display, I wonder will it encourage children to ask if they can take books home to read. I don't know for sure, but it is my greatest hope that it does. Signing off for now with wishes for a bright and beautiful day!
Posted by Aileen Stewart at 6:01 PM No comments:

There Will Always Be Nay Sayers

Recently I had one of those days. You know the kind, the type of day where you just wish you could climb back into bed and start all over. It started with someone critisizing my publishing company and claiming it was a self publisher. Now normally I wouldn't get upset if someone had an opinion different from mine, after all we are all entitled to think what we want; but this woman had the audacity to critisize on the publishers own FB site set up for the encouragement and support of its authors. Her comments seemed to imply that those of us who chose to go with this particular publisher were ignorant and not capable of making sound decisions for ourselves.

From there, the days woes seemed to escalate. A simple misunderstanding between myself and a fellow author about websites caused a person I did not even know to personally attack my site claiming that it was unprofessional and not fit for children. This on top of the previous criticism caused me to have a temporary sense of despair which I commented upon on an support site.

The outpouring of kind words and encouragement from the other authors on that site reminded me of two things. First, there will always be naysayers. People who try and diminish other's self worth, people who are pessemistic, people who don't have anything nice to say, people who think their opinion is the only right opinion, and people who are miserable and want other's to be miserable as well. And second, as Eleanor Roosevelt once said, "No one can make you feel inferior without your consent." I realized fairly quickly that it isn't important what others think or say about my choices. They are my choices good or bad. What is important is that I believe in my choices, do my best to uphold them, and take resposibility for them. As my sister would say, it is up to me to chose joy. And that is exactly what I did. Signing off for now with wishes for a bright and beautiful day.
Posted by Aileen Stewart at 3:21 PM No comments: