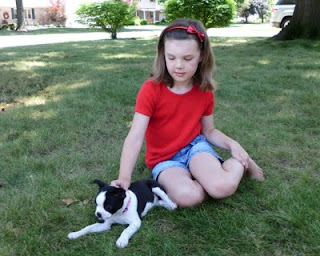 For as long as I can remember my daughter, who is now six, has wanted a puppy; and at the beginning of the year year my husband decided she could have one this summer. I personally was not so crazy about the idea. It's not that I don't like dogs, after all who can resist a cute puppy face; but having had two cats for twenty years until recently has caused me to enjoy being pet free. There's also the fact that I absolutely do not want to clean up dog poo every day!

But being the ever loving wife and mother, I agreed to the puppy concept. I was not looking forward to it, but who wants to have a mopey husband and daughter. So plans were made, choices of dog breed decided upon and re-decided upon, money saved, and papers watched diligently. No dog yet.

And then it happened, no we did not find the perfect puppy; my Mother-in-law did. If I hadn't already loved this woman to pieces, I certainly would now. In her infinite wisdom gleaned from almost 75 years, she came up with a solution that works for all of us. My daughter could share her Boston Terrier pup.

But my Mother-in-law, God Bless her, saw all of this during the last practically sleepless week she has had taking care of her new baby lovingly called Sassy. It was her idea, a stroke of genius, that our daughter should take Sassy home for the night so she could experience first hand the responsibilities and joys of puppy ownership. Thus, finding out just how much work would be involved. "If you should decide you don't want a puppy of your own after all," My Mother-in-law told my daughter. "You can share mine with me, and when she is fully potty trained and a little older, you can borrow her for over nights."

So, last night was our trial run. My husband and daughter went to fetch young Sassy and all of her gear: pet bed, pet cage, pet bowls, pet food, pet toys, etc... And the fun began. There were potty breaks every twenty minutes, there was an adjustment period where my daughter had to get used to the nipping and chewing, there were the romps in the yard, and then the dog left its first present. That was all it took, one small pile of extra squishy doggy poop. I gave her a plastic bag and her dad took her out to clean up the yard. The feel of that waste in the bag as she picked it up was enough to cause her to come to a decision all on her own. "Daddy she said. "I have come to the decision that I want to share Mamaw's puppy with her instead of getting my own."

Who knew a six year old could be so wise? Apparently, she inherited some of my Mother-in-laws good common sense! Bless you Mother Stewart. Signing off for now with wishes for a bright and beautiful day!
Posted by Aileen Stewart at 5:42 AM 1 comment:

Email ThisBlogThis!Share to TwitterShare to FacebookShare to Pinterest
Labels: "

Recently I started thinking about how things in this life change all too quickly. Take for example my parents. When I was younger I never imagined that my parents would grow older, grayer, slower. To me, they were just mom and dad, strong, hard working, able to do anything. But time has marched on and with each passing year they have become older, grayer, and slower. Some health issues have even made it impossible for them to take the yearly family vacation that we have all taken for several years, a fact that the grandchildren have a hard time understanding.

The same thing is happening with my one and only daughter. She is growing so quickly and is not my baby any more. The recent last day of Kindergarten especially drove this home. If I had my way, she would stay six for about ten years or so. One day I'm changing diapers and the next she is going on play dates and taking showers all by herself. Not that I want to go back to diapers mind you, but I so treasure the way she still wants to hold my hand when we go somewhere or how she wants to snuggle before bed. Although I know that as she grows and matures I will find each new stage as delightful as the last, it is with true regret that I watch each old stage disappear.

Which brings me to the point of this blog, the timelessness of characters in books. The characters we grow to know and love in literature remain the same throughout time, very rarely changing from what ever stage of life they were written in. To me Heidi, Christopher Robin, Ramona, Nancy Drew, and all of the other characters that are beloved to me will remain just the way I remember them. They will never grow old, they will never leave me behind, they will always be the same in an ever changing world. I guess that is why I find such pleasure in reading and writing, books keep us grounded in a world where very little is in our control. Signing off for now with wishes for a bright and beautiful day.
Posted by Aileen Stewart at 10:06 AM 1 comment: