When In Doubt Make French Toast

This summer I have diligently set up a table every Saturday Morning at my local farmer's market (except for the Saturday when I was at a Children's Festival in Michigan) where I have offered up my books and assorted other items for sale to the general public.


Books aside, it took me a while to find niche. I tried peanut butter fudge, peanut butter cookies, succulents (which actually sold pretty well), barbie quilts, and home made granola (which sold moderately well). But it wasn't until I started making quick breads and tarts that I finally found what the public appreciated. 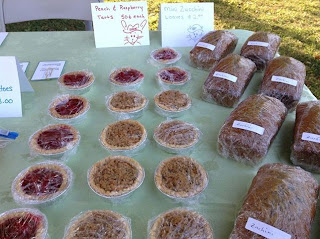 I started making banana bread, pumpkin bread, and zucchini bread all of which are moist and delicious and keep the consumers coming back for more. However, the bread of choice seems to be zucchini, so I always make a double batch. This week was no exception. As I began mixing ingredients, I doubled everything as I went. Six eggs instead of three, four cups of  zucchini instead of two, and so forth. At least I thought I doubled everything.

When I pulled the freshly baked treat out of the oven it seemed an odd color and not the beautiful golden brown to which I was accustomed. It also seemed kind of dry and springy instead of dense and moist like usual. As I looked over my recipe to see what in the world I could possibly have omitted or added in excess, I realized I had doubled absolutely everything except the sugar. Who knew that too little sugar could wreak such havoc on a bread's color and moisture content.

Anyway, now there I was with eight mini loaves of bread that I knew I could not possibly offer my discerning public. What was a girl to do except make another double batch (sigh). Thankfully my next double batch turned out perfectly, but I still had a dilemma: How was I going to use all  that extra not so great bread? Well, this morning as I readied to take my daughter to school, I thought I could possibly turn some of it into french toast.  So with gusto I grabbed an egg, some cinnamon, and some milk and whisked it thoroughly before slicing and dipping the zucchini bread. Then into a fry pan sizzling with melted butter they went.

When they were golden brown, I removed the slices and poured on fresh maple syrup my husband's nephew made. And just in case you are wondering, yes it was good. Maybe not as good as regular french toast, or the french toast I made one Easter with home made egg bread that my family didn't like; but it was very highly edible. So now I am down to seven mini loaves of not so great zucchini bread. Maybe I can talk my husband into having some less sweetened, slightly drier bread with his morning coffee. If not, I see many a morning with french toast on the menu.

Signing off for now with wishes for a bright and beautiful day!
Posted by Aileen Stewart at 5:12 PM No comments: