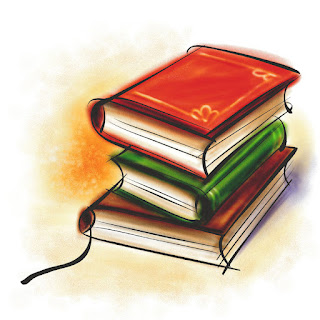 A few weeks ago I was speaking with our children's librarian, Miss Robin, about a plagiarism issue a friend of mine from the UK is having. This apparently made her think of two very similar books she had read that were published only a year apart. She became very excited about the matter, found both books, and requested that I read them to see what I thought. The first book was entitled Where the Ground Meets the Sky and the second The Green Glass Sea.

Since I was in-between books I took them home and decided to compare the two. Both books were set in the 1940's during World War II and happened to be about the secret facility in Los Almos where scientists and mathematicians from around the world were working to create the atomic bomb. After reading both books, I came to the conclusion that no plagiarism was involved, but I did understand why Miss Robin might have thought there was. Each book used a young girl who was above average intelligence for the main character, each book had a cat and a dog mentioned, each book had a group of boys with a secret club house,  each book had a second young girl totally opposite the first girl as a second main character, and each book used similar terminology. The terminology similarities make sense to me since each author was clearly using words and terms from the nineteen forties, but there were enough differences in the writing and style of  each book to rule out plagiarism. 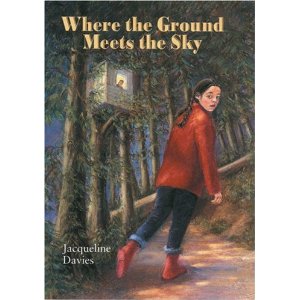 In case you are wondering what I thought about the books in general, I will give a short review for each. I read Where the Ground Meets the Sky first, so I will begin with it. I love Jacqueline Davies very descriptive style of writing which pulled me in from the beginning. It was a superbly well written book about a horrific true life event, but I was saddened that the main character's mother seemed to be either an atheist or one of those people who simply can't decide what to believe. As a Christian, I would have preferred to see a character who believed in something, but that aside it was still a well written story. The ending is quite sad and has the mother unable to cope with what her husband had helped to create, but that is probably a realistic outcome for this chapter in mankind's history.

Despite its award winning status, I didn't enjoy The Green Glass Sea by Ellen Klages nearly as well. This was not because it was poorly written, but because it was written in what I believe was second person instead of the traditional third person. The unusual use of person kept throwing me when I read. I did keep reading, however, and found that this book also had a sad ending with the main character's father being killed in an automobile accident. 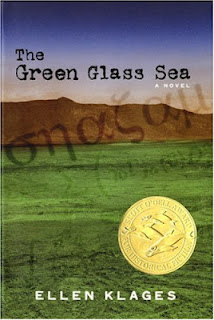 Although both these books seemed historically accurate for fictional stories and both portray sad situations that were probably accurate to the time period, I personally tend to like happier endings. But if you don't mind sad endings, then perhaps you might want to check these books out for yourselves.

Signing off for now with wishes for a bright and beautiful day!
Posted by Aileen Stewart at 9:14 AM 2 comments: 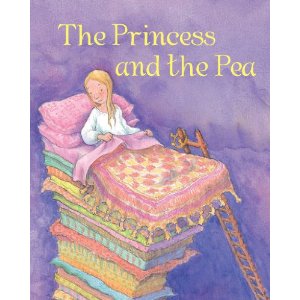 Do you ever become reminded of  books, stories, or past memories in an unusual way? Sometimes that is the most fun. Recently I woke up one morning and found, much to my amusement, that I had slept on two small bicycle helmets belonging to my seven year old daughter's Polly Pockets.

For those of you who are familiar with Polly Pockets, you know they are very small dolls with a myriad of accessories and rubber clothes. What you might not know, however, is the fact that there are some pint sized Pollys about half the size of the originals. So you can well imagine that the bicycle helmets for the pint size versions are only about the size of a very large pea.

Picking up those pea sized helmets from my bed, I began to laugh. What was I laughing at you ask? Why the story of The Princess and the Pea of course. You know, that old Hans Christian Anderson fairy tale that tells of the princess who slept uncomfortably on a huge stack of mattresses because someone had placed a pea underneath the bottom mattress. Apparently the fact that she was able to feel the pea was the tell tale sign that she was true royalty.

Since I obviously did not feel the peas I was sleeping on, peas that were right under me and not even under a stack of mattresses, I am not a princess. Saddened as I am by that knowledge, I think I will survive. I might even go to the library and see if I can find a copy of The Princess and the Pea to share with my daughter, who for some unknown reason, was playing where I sleep.